2025-Worth trillions -IoT- The Internet of Things Defined 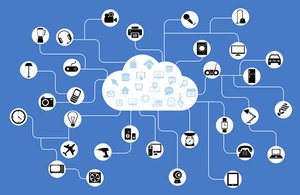 I am fascinated by all things tech. The concept of the internet of things is a lot to wrap your head around.

IoT is not just integration, it’s interoperability. Like it was in the early days of social ( can you believe how far past that we actually are now?) NO ONE was talking integration. Now, it is a key to making you more visible, to getting you found in search.

We are at the same early stage in IoT, still not sure what, how or if it will be viable for us, and in all honesty, most of us are not completely sure WTF this ‘Internet of Things’  IoT (acroynym – gotta love them! after all TROOL is one)  really is!???

When I saw the predictions of the worth of IoT by 2025, I felt I needed to research this a bit more.

Here are my findings re IoT: a few definitions, including Wikipedia, and Forbes, as well as a thought-provoking video from an article on  McKinsey&Company that sparked even more questions for me!

What do you think? How will IoT affect you and your business?

Forbes Article:  Simply put, this is the concept of basically connecting any device with an on and off switch to the Internet (and/or to each other). This includes everything from cell phones, coffee makers, washing machines, headphones, lamps, wearable devices and almost anything else you can think of.  This also applies to components of machines, for example a jet engine of an airplane or the drill of an oil rig. As I mentioned, if it has an on and off switch then chances are it can be a part of the IoT.  The analyst firm Gartner says that by 2020 there will be over 26 billion connected devices… That’s a lot of connections (some even estimate this number to be much higher, over 100 billion).  The IoT is a giant network of connected “things” (which also includes people).  The relationship will be between people-people, people-things, and things-things.

The Internet of Things (IoT) is a system of interrelated computing devices, mechanical and digital machines, objects, animals or people that are provided with unique identifiers and the ability to transfer data over a network without requiring human-to-human or human-to-computer interaction.

If policy makers and businesses get it right, linking the physical and digital worlds could generate up to $11.1 trillion a year in economic value by 2025.

The Internet of Things—sensors and actuators connected by networks to computing systems—has received enormous attention over the past five years. A new McKinsey Global Institute report, The Internet of Things: Mapping the value beyond the hype, attempts to determine exactly how IoT technology can create real economic value.

MGI partner Michael Chui discusses the economic potential of the Internet of Things.

Our central finding is that the hype may actually understate the full potential—but that capturing it will require an understanding of where real value can be created and a successful effort to address a set of systems issues, including interoperability.