If I ever worried about my ego getting out of control, all I have to do is have a blonde moment - which happens regularly - to get me back in order.  My most recent blonde moment involved a French press coffee maker. 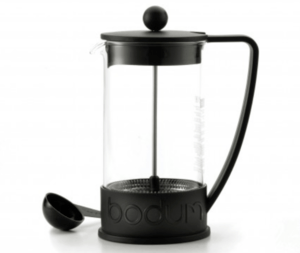 A few months ago I had an urge for flavored coffee, and pulled out my French press to make my favorite Godiva chocolate raspberry truffle - even the name is a decadent treat.  I don’t use the French press often, so I found my coffee had grounds in it. That was annoying, but I figured it was a lack of skill on my part.  Especially since I’m all tassimo these days, so totally spoiled.

Over the next couple of days I got annoyed with grounds in my coffee and put the French press away.  Jump ahead a few months, and I decide I want a cappuccino, which requires a frother. If I’m going to indulge, I should do it right!  I dropped by Walmart with hubby to pick up a milk frother. He insisted I already owned one, and Walmart didn’t have what I wanted.  Later that week, shopping with a friend, I found the right gizmo at Ikea.

I proudly displayed my brand new, five dollar frother when I got home. With a sigh, hubby went to the cupboard and pulled out a familiar item. In his hand was the ‘French press’ I’d been complaining about because of the grounds, which - blonde moment warning - is actually a milk frother. 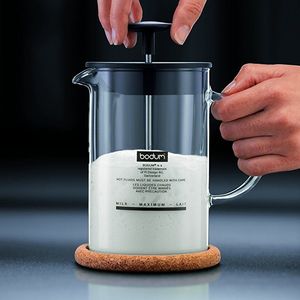 He had to go online to the Bodum site to convince me it was a frother - I am stubborn in my blondeness.  It was, in fact, a frother. In my defense they look alike, except the frother is missing the coil around the bottom of the plunger that - y’know - keeps the grounds out of your coffee.  And, printed on the side of the milk frother it says “Milk - Maximum - Lait.” (You can laugh at me now. He certainly did. Okay, I did too.)

Turns out my French press (died/disappeared/got smashed) years ago when we moved.

Turns out I even have a fancy mug with a plunger for frothing milk built in. In case the original frother wasn’t enough. 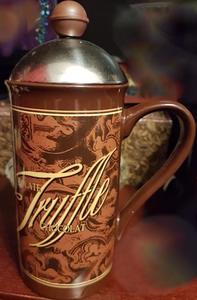 And, if I’m bored, I can use the new one, for a change.  I can froth in three different ways all over my grounds-free decadent coffee.  And once I get a new French press, every sip of my utterly delicious Godiva chocolate raspberry truffle coffee will remind me to keep it simple, and not get ahead of myself, because I’m still blonde.