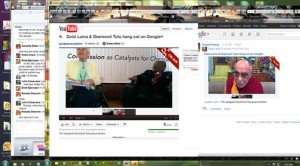 JOHANNESBURG, South Africa — The Dalai Lama on Saturday sharply criticized China, which is accused of blocking him from travelling to South Africa to celebrate Archbishop Desmond Tutu’s 80th birthday.

The Tibetan spiritual leader spoke with Tutu and answered questions via a video link, instead of attending an event honouring South Africa’s anti-apartheid hero a day after his birthday. Tutu asked the Dalai Lama why the global giant and South Africa’s main trade partner China feared his fellow Nobel peace laureate.

The Dalai Lama, sitting in a room decorated with orchids and silk hangings in his home in exile in India, was playful at first. He said communist propaganda portrayed him as a demon, as he raised his index fingers to his temples.

“Yes, I have horns,” he said, drawing laughter from Tutu and others watching him on a video screen at the University of the Western Cape, near Cape Town. The encounter was streamed live on the Internet, but not broadcast by South African state television as had been expected.

The Dalai Lama said for communist officials and those in other totalitarian systems, “telling lies has unfortunately become part of their lives.” He said he made Chinese officials “uncomfortable” because he tells the truth.

He added the Chinese people should be able to hear his views and judge for themselves. “Censorship is immoral,” he said. He also called for legal reforms in China.”The Chinese judiciary system must raise up to international law standards,” he said.

The Dalai Lama earlier this week called off his South Africa visit after waiting weeks for a visa. South African officials deny they stalled because of pressure from China, which accuses the Dalai Lama of being a separatist. The Dalai Lama insists he is only seeking increased autonomy for Tibet.

In letters sent to H.E. Ellen Johnson Sirlef, Ms. Leymah Gbowee and Ms. Tawakul Karman, His Holiness the Dalai Lama congratulated them for being awarded jointly the Nobel Peace Prize for 2011…

Both of these incredible men have an infectious laugh and a great sense of humour.  They bantered back and forth laughing loudly and wholeheartedly at each others jokes..

The Archbishop spoke about women and how we need to be given a better place he said “Let women over”.. He lauded the 3 Nobel Peace Prize winners who are women,Liberian President Ellen Johnson Sirlef, Liberian peace activist Leymah Gbowee, and Tawakkul Karman of Yemen for their work on women’s rights. He also mentioned Bono and Geldof as great examples of consideration for their fellow men.

The Dalai Lama said  It is not sufficient to have a smart brain we must have  warmheartedness – once the motivation is there in all of us it will crowd out any bad thoughts  and the world will be more peaceful. He said the #1 thing we all need is compassion. He also stressed that Peace means non-violence not just physical but also corruption. When asked by Tutu ‘Did he have an army’ he said ‘Yes… Our weapon is Wisdom.’