Hangout Party.. Music to my Ears!

On October 27th, I discovered an awesome surprise!  I was halfheartedly cyber-tidying, after my Mastermind call was rescheduled and I stumbled across a hangout with the luminescent Heather Fay and the sultry Cat Beach, so I popped in…

What an opportunity! Hangout Party where I discovered a weekly  ‘Open Mic’ Hangout. (The technical expertise provided by  Cam Meadows  and it is Live Streamed)  Sitting-in on a stellar group of musicians playing, singing and cheering each other on, was such a treat.

I joined in just after 9pm, although the concert had started at 8pm.  I was so blown away by the talent, and the full experience, I can only imagine what else I missed.

I was thrilled by the hauntingly ethereal voice of Heather Fay, lulled by the smoky-velvet tones of Cat Beach, and energized by Mina Koo’s quirky and catchy hook…OMG its still playing in my head!

And that those were just the female artists in the Hangout!

A master in his own right, Dan Hagen played guitar while Cat sang.  Then there came the angelic Taylor Henry *wink wink* who had a lilting voice, that simply drew me in.

We were also treated to a song from Scott Feierstein, who, for all his protests of being out of touch with his guitar, didn’t sound rusty at all.  I could have drowned in Doug McDermott’s voice, it was so deep and earthy.

In addition to myself, Lamond B, and Mel Rodriguez,  the esteemed duo of Steve Altman and Tom McWilliams (of Monstro Visionary Entertainment), sharing a cyber-seat, rounded out the enthusiastic and appreciative audience.

I’ve said before how much I love Hangouts and how much I am totally enamored of Google+ and all the possibilities it provides.

For me, this is TROOL-Y what was envisioned by those who talk about the Global Village: Talented artists from all over the world sharing music, 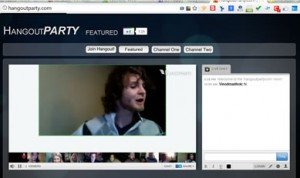 offering each other support and reveling in the good vibes.  Each artist seemingly and unabashedly safe, baring their very souls.

Do I sound smitten? Hells Yeah!

Growing up, I was always told I was tone deaf, and couldn’t carry a tune from here to the door.  For this reason, I think I am even more mesmerized by all of the talent out there. Within this hangout, an ocean of musicality was suddenly open to me, and I was free to dive in and float around.

I give Hangout Party two thumbs up, and who knows, you may get to hear the next great sensation in an intimate setting like none other.

Give Hangout Party a whirl! Go on…do it now!