I can Multitask: Busted!

According to a study covered in Business Insider. only 2% of the population can successfully multitask.

I’ve given lip service to the fact that we really can’t multitask and have agreed with people over and over that that’s really know the way it is just concentrate on one task at a time but I guess I didn’t wholeheartedly believe that. (I’m different, blah blah blah.. In my head convo with DUH!!)

Because it fact I multitask all the time. NOTE: I DID NOT SAY I MULTITASK WELL!

A few weekends ago,  after the crash of my computer, the hassle of purchasing a solid-state drive, deciding to install my operating system myself, keeping the additional 2 terabyte hard drive from the old machine, and the long hours it took to reinstall everything, I have to say that I now know for a fact multitasking is not possible. Not by 98% of the populace as it turns out!

Well it’s not possible if you want to do things properly.

I have been very lucky in the past year in a lot of different areas. In fact I won a cupcake bouquet a while back . Ithought about it while waiting for things to install on the new computer. I called the woman who owns  Bouquet Plaisir  her name is Miriam and I told her what I’d like.

Miriam was very gracious and asked me about my preferences. I told her how I don’t particularly like yellow, all the while working in the background on the computer.

Well it seems I clicked the wrong box at one point and had to start over. I gave myself another hour’s work. The next day the cupcake bouquet arrived. OM capital G is absolutely stunning!  This is a cupcake bouquet that looks like a bouquet of beautiful fresh flowers. 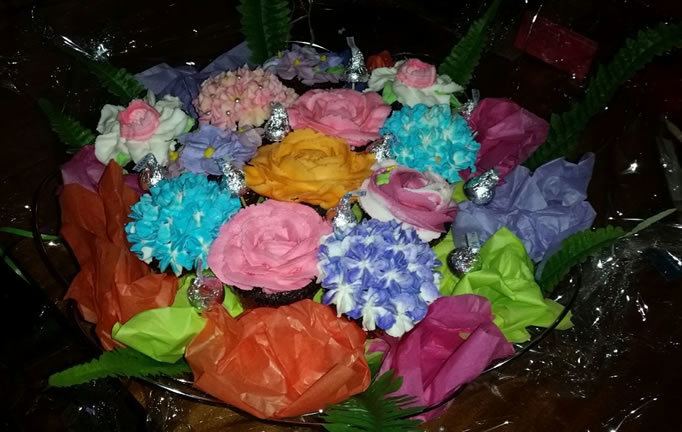 Not wanting to ruin it I took pictures still with the cellophane wrapper. We had friends over to come and check out the cupcakes. Later however in my rush to give credit where credit is due , I put up a post on Facebook with one of the pictures wanting to make a point of giving  The company bouquetplaisir.com a heads up and let people see the incredible work Miriam does in this medium.

This is where the multitasking peice comes in.

I am so sorry Miriam. In my incredibly tired state, I did manage to get the picture up properly. I did not however the web address correct.
[The link actually went to a shall we say questionable site. LOL  I had typed in boutique instead of bouquet in the URL.]

Oh Thank God  for people who pay attention. My hats off to Tannis who sent me a private note asking “If that was, in fact, the correct link to the cupcake place?” I sent a message back saying I think so and I’ll check.

11:27 PM as I check on my iPad, I realized that I could not, edit the post. I was mortified. I had  put up a beautiful picture of a cupcake bouquet and the URL link to “a less then cupcake like URL.”

Making a mistake like this, really points out how much of a problem multitasking can be. I have apologized to Miriam. I have now corrected the link in the original post. I hope this blogpost will serve as a cautionary tale for anyone who is wondering if maybe they should stop multitasking. YES Do it. Do it NOW!

Sometimes we just need to be reminded that we can’t do everything, particularly, at the same time.  LOL